The title of the book has been changed and now is called the same way it has always been called in everyday usage:
LANDWIRTSCHAFTLICHER KURS (Agriculture Course) Geisteswissenschaftliche Grundlagen zum Gedeihen der Landwirtschaft

The ninth edition has been fundamentally worked over.  The editors are Hans-Christian Zehnter, Rudolf Isler, Ueli Hurter, Martin von Mackensen and Albrecht Römer.

A special bit of luck

It has been possible to render the shorthand transcripts by Lilly Kolisko, who was present during the course at Koberwitz and in Wroclaw, anew in fair copy.  This resulted in text variants, corrections and additions.  Especially important are fragmentary notes of a discussion of the farmers, probably on 8th June in Wroclaw, in which Carl, Count von Keyserlingk, and and Ernst Stegemann had words.  Despite this incident a resolution was formed, in which the farmers present founded an experimental circle and a working group.  This resolution was read out and commented on on the morning of 11th June by Carl von Keyserlingk.  Its wording is included in the newly deciphered shorthand of Lilly Kolisko and appears beside the fragmentary notes on the conversation in the new edition for the first time in print.  Steiner’s address followed afterwards, which had been already included in the earlier editions of the Agriculture Course.  After the address Steiner held the third lecture, in which he referred to what he had just said in the address.

In the second question-and-answer session on 13th June until now a longer passage about magnification through a microscope had been missing, which has been passed down in typescript and from Kolisko.  Steiner criticises the opinion that things can be evaluated, when they are strongly magnified.
A discussion about corks, which has been handed down in typescript, has also been missing so far.  The botanist, Alfred Usteri, wanted to know whether corks that come from the bark of cork oaks and are easily obtainable could be used for the oak bark preparation.  Steiner rejected this suggestion: in fact, he clarified that it must be the bark of the pedunculate oak (quercus robur).  After the Course, though, there was unclarity about this.  In a list of questions it was written that Steiner said quercus rubra.  This tree, the red oak, is at home in the East of North America, but has been planted in Europe as a tree in parks and also in forests.  With Kolisko it is quercus rubor (instead of robur?).

No Controlling of tiny living things

Further important changes came about on the basis of the shorthand of Lilly Kolisko, in which the first four lectures are unfortunately still missing.  Only fragmentary notes on the first and second lectures and the beginning of the third have become available to us.  In lecture 5 up until the eighth edition it was written in the fertiliser the planting and breeding of tiny living things (bacteria etc.) are unimportant, but rather it is about controlling them.  With Kolisko, on the contrary, it is recorded that controlling them is not acceptable.

Up until the eighth edition it read: the heavens give to the earth silicic acid, lead, mercury and arsenic off their own bat “with the rain”.  Kolisko noted, on the contrary, “like the rain”.

Of the yarrow preparation it says in the text it has an “erfrischend” (refreshing) effect.  With Kolisko it runs “auffrischend”.  This word means ‘renewing’, ‘restorative’.

Comprehensive footnotes and proof of all text variants

From the first up to the eighth edition the former editors had added a great number of corrections and additions to the text.  However, they were only documented to a minor extent.  In the new ninth edition all changes vis-à-vis the eighth edition are made visible by square brackets and explained in detail in the references.  Thereby and through further references people can follow the changes to the text right back to the first edition.  The reader is thus put in a position to form a judgement themselves about the numerous text variants.  There are several familiar passages which we have accepted up to now as they stood, of which, however, we now know on the basis of close scrutiny of the available sources that they are uncertain or even erroneous.  On the other hand, there are passages which we might consider dubious up until now, because they are not easy to understand, of which, however, we now have to accept on the basis of the new sources that they have been passed on correctly.  There are very many minor corrections to the text, which are not mentioned here, but which are important for close study of the lectures.  The footnotes and references on individuals, content and unclear passages have been greatly expanded in the new edition.

At the end of lecture 2 Steiner explains that in each agricultural individuality how many animals and which species belong to it, which plants they eat and how much manure they produce comes about of its own accord.  This he calls a cosmic-qualitative analysis.  Thus it is written in the text of the book.  However, now notes of Lilly Kolisko have been found, in which she passes on the term “cosmic-quantitative analysis”.  Cosmic means that it is a matter of an analysis on the etheric-spiritual level, in the life realm: here it can be a matter of the quality of the feed and the manure.  Or else, it is a matter of the number of livestock appropriate to the farm arising through this analysis.  Thus, we can consider both versions possible and meaningful.

In lecture 6 Steiner spoke about the signs of Scorpio and Taurus.  However, it is evident from his more precise indications that he did not mean the astrological signs of the zodiac, but the actually visible constellations in the sky.  In the third question-and-answer session on the same day, 14th June, 1924, he said, “The constellation of Venus with Scorpio is to be taken in such a way that every constellation with Venus is to be considered, in which Venus is to be seen in the sky and behind it the sign of Scorpio.  Venus must be behind the sun”.  He termed this constellation a“high conjunction of Venus and Scorpio” and indeed meant thereby the so-called upper conjunction, in which Venus is standing behind the sun.

Direct and indirect working of the Planets

There is a contradiction between lecture 2 and lecture 6, which the editors of the new edition draw attention to, without being able to finally resolve the problems involved.  In lecture 2 it is said the moon and the inner planets, Mercury and Venus, work together with the sun directly on the plants above ground, the outer planets, Mars, Jupiter and Saturn, on the other hand, work with the sun in a roundabout way via the earth.  In lecture 6 it is exactly the other way around: the outer planets work directly on the plant above ground and the moon works with the inner planets, Mercury and Venus, indirectly in a roundabout way via the soil.  Important statements about the effect of the moon and the planets on the plants are not impaired by this contradiction!

How do Roots find the right Quantity of Salts?

In lecture 8 it says, “Let us look at the root: the root, which as a rule develops inside the earth, which is permeated through the fertiliser with the emerging ego-force; it absorbs the developing ego-force through the whole manner in which it is in the earth, and it is supported in the absorbing of the ego-force, when it can find the right amount of salts in the earth”.  To start with, you might think that here cause and effect are mixed up and that you can correct the meaning, if you replace the word ‘if’ with ‘that’.  However, in Lilly Kolisko’s shorthand it is clearly ‘if’.  Instead of changing the sentence, we need to consider how the root can find the right amount of salt?  It cannot be a matter of the salts having to be put into the soil through mineral fertilisers.  We must rather think that, in the sense of lecture 5, the preparations endow the plant with the power to find the substance it needs for itself.  Thus, through the close scrutiny of the text we are challenged to understand the statement in a different way than at first assumed.

The volume contains colour reproductions of the blackboard drawings, newly discovered notes of Rudolf Steiner, extracts from his address to the youth, which was given on 17th June, 1924 in Koberwitz, a detailed, specialist index and a lot more besides. 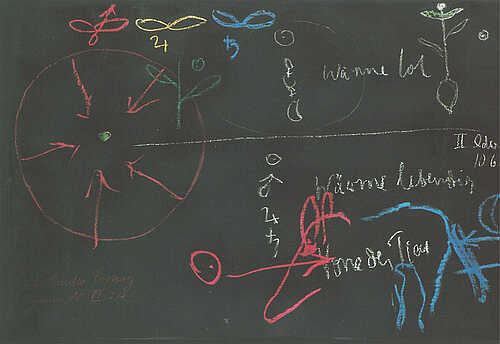