The Culture of Nutrition

Humans have various preferences regarding food: traditional diet, vegetarianism, pesco-vegetarianism, flexitarianism, veganism, gluten-free or ketogenic diet. Or even just eat by habit and what is known from the family. Some people seek quality, others convenience by giving preference to prepared dishes and some look for cheap food. There are as many practices as there are ways of conceiving food!

Although a vital need, the act of eating is truly a fundamental experience that goes beyond an individual human being and shapes the identity of today’s and tomorrow’s society. And additionally, the way of eating is crucial for a sustainable development of humans and the planet earth which is among others demonstrated in the Planetary Health Diet (Eat-Lancet Commission, 2019).

Claude Lévi-Strauss pointed out that cuisine is a language through which a society expresses itself (Lévi-Strauss, 1990). According to Lévi-Strauss, there is a close relationship between the food that people eat and the image they have of themselves and the universe. “Tell me what you eat…and I will tell you who you are”, wrote the famous French gastronome Jean Anthelme Brillat-Savarin in his book "Physiology of taste ". This relates to the German philosopher Ludwig Feuerbach who postulated in 1850 “you are what you eat”.

On one hand one can be what one eats, because the way of eating has an influence on the health but also on food production from the field to the plate. On the other hand, one doesn’t become the food one eats. In digestion the food is “destroyed” beyond recognition. The human organism even overcomes the food in digestion.

It is true that French cuisine is known worldwide for its gastronomy. Since 2010, it has been listed as an intangible heritage by UNESCO. In addition, the so-called ‘French Eating Model’ is characterized by structured meals and conviviality. More precisely, three meals are generally eaten per day, at set times, and snacking remains relatively low. Main meals (lunch and dinner) include three courses – starter, main course, and dessert – and are taken seated at a table. Moreover, meals are pleasurable moments shared with other people and therefore last a relatively long time (Ducrot et al. 2018). This eating behavior is believed to have beneficial effects on health to such a point that it reveals the existence of a ‘French paradox’: low cardiovascular mortality despite a high intake of dietary fats (Holdsworth, 2008).

In 2014 Ducrot et al. have conducted research within the ongoing web-based prospective observational cohort study NutriNet-Santé5 launched in France in May 2009, that aimed at assessing the adherence to this model by French adults and whether it was associated with weight status. Eating behavior and, in particular, number of meals per day, snacking frequency, meal time, meal duration, number of courses, physical posture (standing, sitting), presence of others and pleasure experienced were assessed in 47 219 participants of the NutriNet-Santé study. A global score of adherence to the French Eating Model was computed based on eating behavior components. In addition, the association between the adherence to the model (and its components) and overweight and obesity were evaluated.

The findings of this study indicate that the French Eating Model is still dominant in French adults in 2014. However, new tendencies were noted: many individuals devote less time to meals and practice two-course meal pattern (20 %).

Regarding commensality, the results of this study have highlighted that most meals were taken with family, and in particular weekday dinners and weekend lunches, and were mainly considered pleasurable moments. The authors suggest that the greater importance attached to the pleasure experienced from food, compared with other countries, might be one of the reasons for the relative conservation of the French Eating Model.

Generally, this study has shown that individuals who exhibited higher adherence to the model were less likely to be overweight. Some characteristics of the model appeared to have a negative association with overweight and obesity (i.e. three meals a day, few snacking episodes, eating at set times, taking time when eating and considering meals as moments of pleasure). Finally, the number of courses per meal and the physical posture when eating were not associated with weight status.

These results demonstrate the potential role of the French Eating Model and the importance of highlighting its positive eating behaviors for obesity prevention and therewith for health. And they also point out that an eating culture, including pleasure, joy and community has a positive effect on health. A culture is always something created by humans, so one can say that a healthy diet is not only based on what is eaten but also how food is eaten. 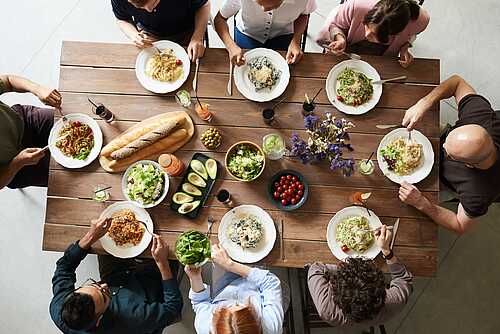