Potassium and Fertilising – the Yarrow Preparation in the “Agriculture Course”

The Potassium Gesture in the Plant Realm

In lecture 3 of the Agriculture Course Rudolf Steiner develops a concept of substances, which is generally valid: substances are the carriers of forces.  There are no substances as such in any living things or conscious creatures.  In order to understand life and its processes you have to know about the carrying of various substances.
Now the following questions arise: which forces are connected with potassium? How can we understand potassium as the carrier of the impulse of forces?  Which forces does potassium impart?
From an anthroposophical-geological viewpoint with potassium we are faced with a phenomenon of the earthly mineral, of the solid element, which is especially strongly anchored in the physical-material realm.  Thus the gesture of potassium’s working in the plant realm may be understood well.  It provides for the firmness in the plant, in particular, for the formation of the stem, but also for general firmness vis-à-vis the outside; a good epidermis formation belongs to it.
If the plant is unable to absorb sufficient potassium salts, it cannot retain water well.  Its epidermis function is weakened; it dries out faster.  It is more susceptible to micro-organisms that penetrate it and cause the so-called plant diseases.  It appears to absorb with the potassium salts something that allows it to grow better into its own nature or to conserve it better.

Now in our yarrow preparation we have a kind of model for the plant world with a disposition to deal with the forces carried by potassium.  Yarrow is able to shape and organise the potassium processes in a particularly exemplary fashion in the common earth and plant growth.  By closer observation, we may realise this in the way yarrow and its roots grow in locations with a potassium deficiency.  Moreover, in its root formation it shows us clearly how it penetrates the soil in this sensory root process in a masterly way (maybe a drawing here of the yarrow with roots).
Now for the yarrow preparation the bladder is used as an animal organ.  And here too in the process of the excretion of urine through the kidneys and the bladder, potassium plays a central part.
The overall production of the yarrow preparation follows a certain logic: mobilising the forces, carried by potassium in the living realm of the plant (not so much with human beings or with animals, where it is sodium rather), introducing them into the common earth and plant growth via the etheric-astral route and strengthening them.
That can only be achieved through the actions of people.  In the natural process most potassium has been precipitated into a dead salt state and has dropped out of the realm of life; for example, in the depth of the salt domes from primordial oceans.  When people fertilise with potassium salt in the present day, they use this source, for example, in Hessen and Thuringia.

Before the “Agriculture Course”

In 1921 and 1922, that is, before the Agriculture Course, Rudolf Steiner made a recommendation to Streicher, a chemist at BASF, with regard to fertilising with potassium.  The gist was that in certain special cases people can and must definitely fertilise with potassium/magnesium, though it is necessary to add a strong plant-based poison, Digitalis Purpurea, in 10% concentration.
This practice has been picked up later in a biodynamic context. There are also trial results on it.
Then in 1924, in the Agriculture Course there followed the presentation of the yarrow preparation and the other fertiliser preparations.  Apart from the etheric and astral processes which need to be precisely taken account of in production, the seasonal aspect is now of great significance.  Rudolf Steiner describes in detail quite precisely how this yarrow preparation in particular can enable the cultivated plants through fertilising to absorb potassium or rather to carry out the potassium process properly.  With not a word does he mention fertilising with potassium/magnesium.  The yarrow preparation has taken their place.

The Potassium Process and Clay

With the well-known three-layer clays, which are essential in all soil processes that contribute to enhancing fertility (clay-humus-complex), potassium plays a critical role once more.  After all, it is in this place where potassium is actually stored in the half-alive element of the soil, in that it is bonded with the clay platelets.  And our biodynamically bred cultivated plants are able with their root activity to access this potassium, aided by the specific fertiliser.  Edwin Scheller researched and portrayed this impressively in the 1990s.  This process is particular to the farm to a high degree: a progressively, increasingly, specific interconnection of processes of the locality, cultivated plants and animals that leaves its stamp.

The Horn Silica Preparation and the Potassium Process

Three weeks after the Agriculture Course Rudolf Steiner conveyed through Guenther Wachsmuth in a letter to Count Carl von Kayserlingk a more precise, modified version of the production of the silica preparation.  In this he mentions the orthoclase, feldspar, alongside the silica once more, as he had in the Agriculture Course.  He points out that a pea-size piece of the mineral would be sufficient, if, before filling it into the horn, you were to crush it and knead it together with the earth upon which the preparation is to be spread later on.
Evidently, with the silica’s carrying of the forces in union with the potassium in particular, Rudolf Steiner is concerned about an impulse which, on a mineral-geological level, is realised and present in orthoclase, feldspar.
When the wonder of the clay-mineral- new formation is accomplished in the enlivened soils, this is just possible through the feldspars, and in them what has been carried by the potassium is at work.

The Agriculture Course will undoubtedly be a source of intuitions for a long time, when it is transformed through our own ego in our actions, feelings and thinking.  The connection of the potassium process with the yarrow preparation as well as with a form of the silica preparation that has been adapted to the farm in an individualised way in the direction of orthoclase (potassium feldspar) points in a new direction for our future work.
For me particularly in the case of the major, difficult theme of “the carrying capacity of potassium in the realm of life” the developmental process has become clear which Rudolf Steiner went through himself - up to what he then described in the Agriculture Course. 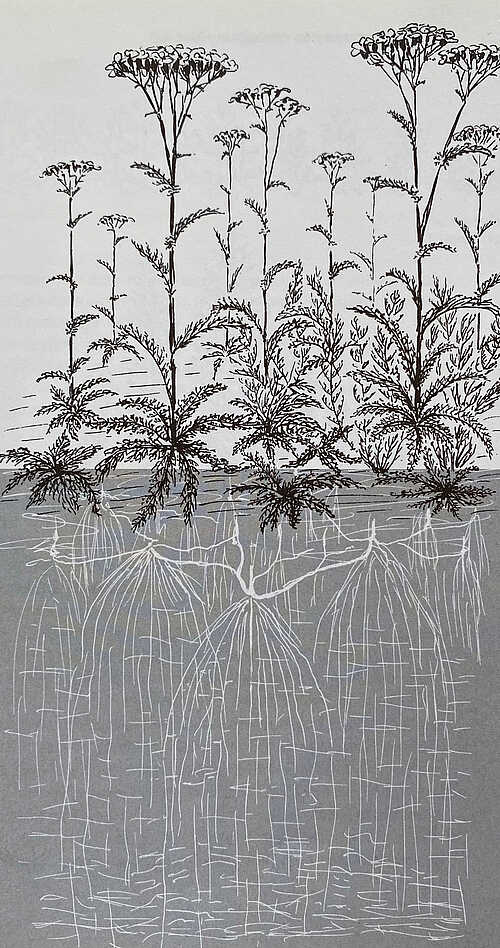 Yarrow with roots
Back