We need analytics as well as spiritual science

The first international research conference on biodynamic farming took place at the Goetheanum from 5 to 8 September. Over 180 farmers and scientists met in order to share their views on the most recent research results and projects in the field of biodynamic farming.

Sebastian Jüngel What kind of resonance has this research conference left for you?

Jean-Michel Florin My impression is that the wide-spread biodynamic scene – farmers as well as scientists – have moved more closely together. The mood during the conference was one of gratitude, even euphoria and hope. We had researchers there who are close to bd farming but also people for whom this was the first conference on the topic.

Verena Wahl People came to this conference from 26 countries and all continents – for the first time German was no longer the main language.

Jüngel What led to this mood?

Florin About two thirds of the people present had prepared their own contribution – which means that a more than average number were involved in shaping the conference.

Wahl The way the conference was structured also played a part. Before the conference started there were guided tours of the Goetheanum, and the conference provided space for people to get to know and share their thoughts with one another. The work groups (‹Experience the Living›) also made it possible to approach the conference themes in ways people were not used to from other scientific conferences: through feeling and activity. And we had a festive conference dinner.

Research and practice working together

Jüngel Which topics touched people most?

Wahl Researchers working together with a farmer, for instance. Mechthild Knösel from Rengoldshausen Farm (de) questioned the necessity for separating calves from their mother. She was looking for possibilities to raise calves close to their mothers, particularly considering that the calves got sick quite often. As a result of her cooperation with two researchers, Anet Spengler Neff from the research institute for organic farming (fibl, ch) and Silvia Ivemeyer from Kassel University (de), a set of guidelines and practical advice have been published (these can be bought from https://www.fibl.org/en/shop-en/1660-mother-bonded-calf-rearing.html).

Florin It is so fruitful and forward-looking when – as intended by the Section for Agriculture – researchers and farmers work together and scientists don’t just get data from farms. One looks at genuine questions and solves them together. Concrete results are achieved that benefit the animals.

Wahl Conventional farmers also like to make use of the results of this cooperation.

Florin I was touched to hear that the research conducted by Daniel Kusche (Kassel University, de) has revealed that milk from biodynamic animal farming is tolerated better and that it even enhances infant immunity (i.e. fewer allergies). And I was impressed by the presentation by Karuppan Perumal from a bd training in India. He demonstrated how more carbon dioxide is bound in the soil with BD farming methods than with others. It was also interesting to hear that a field study carried out by Marie Auger from Spirit of the Earth Farm, Hawaii (us) seems to indicate that ddt-contaminated soil is decontaminated more quickly with biodynamic than with main stream methods – I had heard of similar results in a project in France. We need to continue to work on this.

Relevant for agriculture in general

Jüngel What image of biodynamic research did this conference generate?

Wahl Working conditions are different across the world for research scientists. Trying to get bd farming research accepted at a university in Latvia is difficult. This was evident when someone from India asked whether Latvian studies took the seed calendar into account. This is not possible in Latvia. Scientists appear again and again in a country, like beacons, but they are often left alone with their work and were therefore delighted to meet like-minded people.

Florin We must not forget that connecting research and practical application was an intrinsic part of the biodynamic approach right from the start. A trial group for biodynamic research was founded very early on. Ehrenfried Pfeiffer conducted research in the basement of the Glass House, the building that is now the home of the Section for Agriculture. Some people see Rudolf Steiner’s Agriculture Course as a collection of answers, while it is in fact mostly posing questions. Jürgen Hess, professor for ecological farming and horticulture at Kassel University, summarized this when he said, «You have twelve important treasures that you have been working on. That is relevant for agriculture in general.» This is new.

Jüngel Why is this?

Florin: The food situation is desperate and the climate change makes farmers worry about their farms. The thought of individualism in farming, which is expressed in the «closed agricultural course», helps here. Today, we call this resilience.

Wahl There is another reason which has to do with animal welfare. For a long time this was not seen as particularly important. But due to the vegan movement – which is not necessarily organic – animal welfare has become an issue.

The need to apply the theory in practice

Jüngel What were the key topics?

Florin Soil fertility, for instance, and food quality. There was also a need for holistic research methods. The effects of biodynamic farming are not captured by analytical methods alone. We need analytics as well as spiritual science. Without analytics and statistics we won’t be up-to-standard scientifically. But we need a whole range of methods over and above that. As well as evidence-based research which shows whether or not something is effective we need development research. We need to develop ways of applying the theory in practice.

Jüngel Where does the Section for Agriculture stand after this conference?

Florin We have become a broader movement, internationally as well as in scientific terms. In November 2017, at the Organic World Congress in Delhi (in), the biodynamic movement became part of the worldwide ecological movement. At the annual conference on ‹preparations›, which was held at the Goetheanum in February 2018, different approaches were represented on an equal footing. And now we were able to have a research conference.

Wahl  The Section demonstrated its ability to make things happen, such as bringing representatives of different approaches together. While this is not research in the classical sense, it does respond to a real need, as we can see from the response we had from the organic movement and from representatives of the academic sciences. «You are brave!» one colleague told me, because there are normally no experience reports in scientific conferences. For us that means: We do not necessarily have to do research ourselves – activating the biodynamic network in itself has an effect. And our openness did not come across as arbitrary.

Florin And this was due not least to the precise scientific studies. The interface between the world and the Section for Agriculture has grown bigger. We want to continue doing our own research, as we did with the study on biodynamic preparations.

Wahl The biodynamic movement has become more visible and has shown that it is part of the scientific world.

Florin People who attended the research conference have acknowledged our right to make biodynamic research visible. We would like to extend our cooperation with other partners. This is encouraging recognition, the appreciation of a realistic goal.

Jüngel What will happen next?

Florin A wider group of biodynamic researchers will meet, at the latest, in September 2020 in France, at a conference organized by the Section for Agriculture that will precede the major ifoam Organic World Congress. 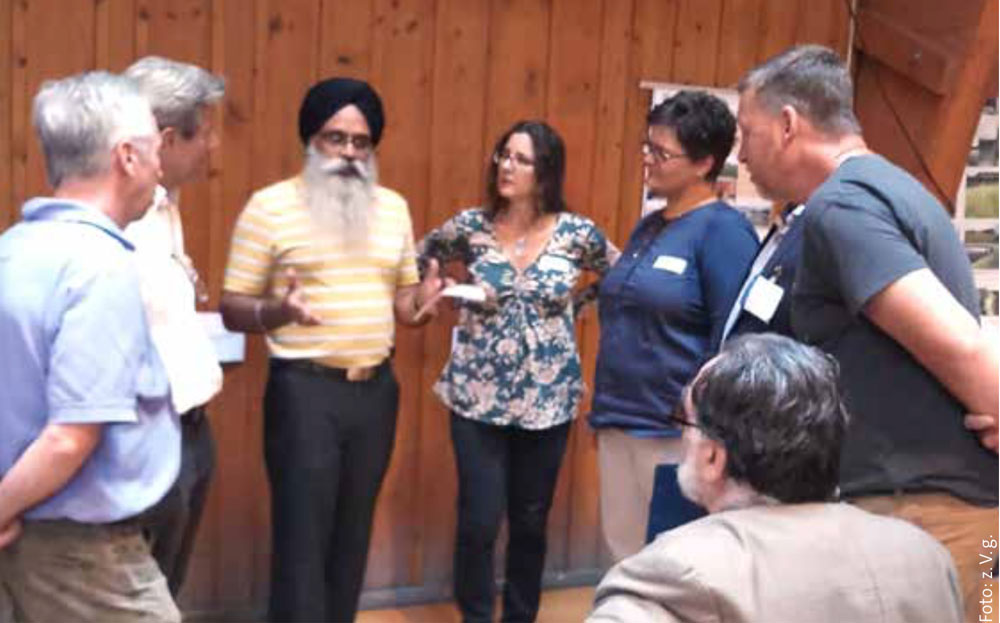