BIOFACH/VIVANESS 2020 – a personal tour of the trade fair

From 12 to 15 February 2020, 47,000 visitors made their way to Germany for BIOFACH, the leading international trade fair for organic food held annually in Nuremberg. The trade fair gets bigger every year, occupying ever more exhibition halls and this year with a record number of almost 3,800 exhibitors. BIOFACH is both a global meeting of the sector and a knowledge platform. This is the place for doing business, presenting new products, sharing knowledge and networking.

Nuremberg styles itself the organic metropolis and has transformed into a friendly city with a passion for organic. For instance, 85 per cent of city nurseries and schools are provided with organic foods. The city accommodates its many visitors from 110 countries in a very professional manner. Even the underground driver sometimes produces a joke down the loudspeaker.

This year's motto "organic delivers!" underlines the trade fair's claim that organic provides potential solutions for many pressing issues. Jane Goodall, the famous primate researcher who is now a venerable elderly lady, gave the opening address. Delegates who listened to her were moved by her words: "How bizarre it is that the most intelligent being on earth is destroying the basis of its own existence." She drew attention to the current reality with environmental problems, species extinction and climate change, and then stated: "This has got to stop." She was greeted with a standing ovation.

The guest country of Italy was notable for its excellent Demeter presentation. And repeated comments were made about the good food and great atmosphere.

The Demeter marketplace, a constant in Hall 7 for years, was very popular, with interesting Demeter products from cosmetics to seed. This is always a good meeting place for appointments or spontaneous encounters with friends and acquaintances.

Packaging was a key topic at the trade fair, particularly environmentally friendly plastic-free packaging for all kinds of products as well as for food-to-go.

For instance, a packaging material made of polylactic acid can be processed into a wide range of shapes and colours and looks like traditional packaging. This was advertised under the slogan "be part of the solution not the pollution".

The sachet for spices which feels like plastic and is rejected from the organic waste out of ignorance is actually made of a wood fibre material and is compostable.

Suckies with fruit juice for children which are always regarded with suspicion on account of the supposed plastic waste are marketed as "Cheeky Friends": the packaging with less plastic has neither aluminium nor plasticiser.

Shops selling loose goods have already set up an association, introducing itself and its services.

While vegan had a substantial presence at BIOFACH 2020, it no longer has such a high profile. There are various flavours of vegan yogurt and also a tzatziki made from almond milk. The competition for the new product of the year even included an entry for vegan ghee made from cocoa butter and olive oil.

It seems there is a need or wish to pay more attention to getting enough protein. In any case, this is a product segment with a growing market. Help with increasing protein consumption comes from almond protein powder and protein spreads based on pulses, in fact soya with coconut and almond, cocoa and walnut or plum and cinnamon flavours.

Karl von Koerber from the working group Nachhaltige Ernährung e. V. presented the final report from his SDG project on sustainable eating. This focuses on how the UN's sustainable development goals (SDGs) can be supported and even reached through food and the food system. In his talk, Von Koerber mentioned that vegan food is not especially sustainable in this context, so does not contribute much to climate change mitigation and a healthy future for mankind and the earth, because a healthy future and binding CO2 requires grassland. This grassland needs to be grazed by animals, preferably ruminants. If these animals are reared organically and are not fed any imported feed, then even the Sunday roast can be enjoyed with a clear conscience. An interesting facet amongst the many findings of the project.

Convenience products were also on display at the trade fair and obviously find a buyer – maybe they might please consumers who have never learned to cook or are short of time for preparing healthy organic meals. They can buy jars of curried sausages in sauce, chicken broth made in Estonia and red wine sauce for heating up, ready to use from the pouch. Instant tea, presented in single-portion sachets as black or green tea, takes convenience to its extreme.

The small vegetarian balls which used to be called rissoles can be had in many novel flavours, such as sweet potato with mustard.

You can even find CBD hemp (CBD (Cannabidiol), a non psychoactive cannabinoid from the hemp plant), in the form of tea or as an oil for the skin. It is likely that next year CBD hemp products will be on offer as the latest trend.

Banana flowers in jars or cans are said to taste like artichoke hearts. The soya- and gluten-free labellings are in line with the general trend, but you might ask how soya is meant to get into the banana flowers. Another curiosity is noodles made from sprouted grain, which are claimed to be especially healthy.

Stands offering tasty things to sample were busy as usual. In contrast, there were other stands that looked like little white boxes: a table with four chairs and maybe a company poster on the dividing wall, plus a man typing busily on his mobile and apparently waiting for customers. Suppliers with only a single product, such as aloe vera leaves or olive oil, hope to acquire new retailing connections at the trade fair.

There were visitors sampling alcoholic drinks such as vodka, whiskey and gin, and listening to a lot of information about them. And others who were enjoying the quiet bright atmosphere in the VIVANESS hall, the hall for natural cosmetics.

The VIVANESS, for years the poor relative of BIOFACH, is also bigger every year. Here, increasing value is given to certified products. The most marked trend in 2020 were soaps. Not only standard hand soaps, but solid shampoo soaps and soaps for the shower. Lavender soaps and soaps decorated with flower petals. Soaps in triangular shapes, soaps that looked like chocolates. There is even soap with Kölsch, a typical beer from Cologne. Soaps are naturally a hit with the environmentally and climate conscious consumer because first, their manufacture does not require emulsifiers, stabilisers and other additives and second, it is easy to avoid plastic packaging. One start-up even called itself and its products Terrorists of Beauty, because the cakes of soap for hair, face and body "change the world with every shower".

The conference programme is more varied and of better quality with every passing year. BIOFACH and VIVANESS each have their own talks and events. There are also fora for specialist retailers as well as worlds of experience for wine, olive oil and vegan products with panel discussions and cooking demonstrations. The Future Generation Zone offers a careers hub and a research prize for the organic food industry.

The wide range of products and variety of topics, and the many encounters and conversations make the trade fair a very worthwhile event and one not to be missed. From this angle you can also say, "organic delivers", and think to yourself, "see you here again next year". 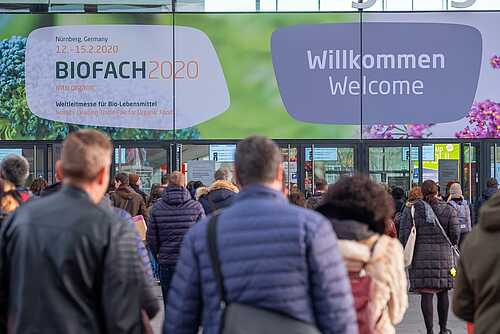 [Translate to en:] Foto: NürnbergMesse
Back